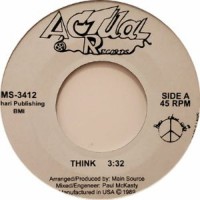 Joint American/Canadian hip-hop group Main Source were late 80s, early 90s hip hop giants, right from the off. The reason? Their debut single, "Think", was an immediate hit: the hard hitting rhymes and crisp boom bap struck a cord and went on to become a hugely sought after 7". Now it gets a proper reissue with the original piano hooks, busy scratching and big horns all sounding fresh as ever, while the instrumental on the flip provides an alternative take. For a slice of OG hip hop goodness, there are few finer tracks.