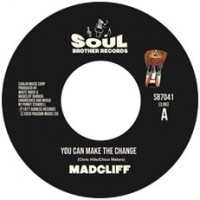 Madcliff recorded one album in 1977 from which come these two tracks for the first time on 7” single. Singer, Songwriter, Drummer, Bassist and Keyboardist Chris Hills wrote the songs and was integral to the group before joining Players Association. The killer cut is the funk bomb “You Can Make The Change” which was made popular by Keb Darge at his legendary deep funk nights and has been sought after ever since.

Millie says: If you’re in need of some more funk in your life – look no further. Two killer tracks from Madcliff are on fire with these catchy lyrics and irresistible grooves . First time pressed on 7” which won’t be around for long!

1. You Can Make The Change
2. What People Say About Love

Eric B & Rakim / MountainEric B Is President