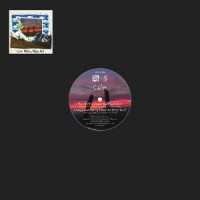 Completing a red hot trio of remix EPs of Calm’s "By Your Side" album is this final part with Lucas Croon, Cantoma and Gallo and Yuri Shulgin all serving up expansive and mind altering new versions.

He doesn’t release often but when he does you need to listen to Lucas Croon. His unique take on ‘Before Landing’ is a proper dance floor heater to get you on your toes. Once you're there, a gentle rush of rave euphoria tases over you and sends shivers down your spine as old school breakbeats and glowing pads complete the trip.

Elsewhere, long time Balearic pin up, scene hero and all round blissed out boss man Phil Mison has a new album coming the spring. Before that, he becomes Cantoma for a timeless version of ‘You Can See The Sunrise Again’ that has bright blue skies and jaunty chords making you move.

Regular label artist homie Gallo is in the form of his life right now - he's resident DJ at Hell Yeah's weekly Balearic night Buena Onda in Berlin, has a growing reputation for being one of the best eclectic selectors in the game and is currently working on compiling the forthcoming BUENA ONDA comp with label head Marco. He gets long legged on his deep cut remix of ‘Sky Color Passing’ which is another killer that slowly but surely works you in a slow motion acid trance.

Completing this most exquisite outing is Yuri Shulgin, a multi-instrumentalist music producer from Tajikistan with credits on Cocktail d'Amore Music. His spellbinding take on 'Ending of Summer, Beginning of Autumn' is a fusion of jazz, leftfield and electronica will have you in a spin and your head lost in the clouds amongst the twinkling stars and cosmic pads.

Patrick says: Marco flexes the Hell Yeah Rolodex yet again, inviting a ridiculous cast of production talent to complete this triptych of Calm conversions. Berlin based Gallo gives us a divine and dreamy chugger, Yuri Shulgin indulges both the arps and his inner Gilmour for a cosmic expedition, Phil Mison enjoys a PSB-oogie by the Med, before Lucas Croon gets ravey with a basement friendly future breaks romp.