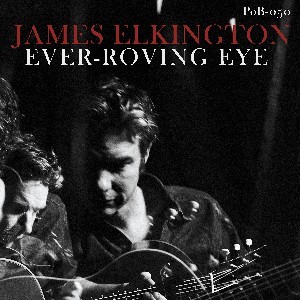 Chicago songwriter and guitarist James Elkington who has collaborated with everyone from Richard Thompson to Jeff Tweedy to Tortoise recorded his sophomore album at Wilco’s Loft, expanding upon his celebrated 2017 debut Wintres Woma (PoB-034) as well as his recent production and arrangement work for the likes of Steve Gunn, Nap Eyes, and Joan Shelley. Casting glances back to British folk traditions as well as toward avant-garde horizons, these brilliant new songs, as accessible as they are arcane, buttress Elkington’s brisk guitar figures and baritone poesy with strings, woodwinds, and backing vocals by Tamara Lindeman of the Weather Station.

“A convincing, warmly whirling weather system of his own.” The Guardian

“James Elkington is a friend of mine, and I have long enjoyed and indeed found satisfaction from witnessing the juicy fruits of his successful labors. Though it sounds like a line culled from a murderous Child ballad, “Ever-Roving Eye” has everything to do instead with the slipperiness of satisfaction, and the equal parts virtue and vice that is being your own mule and driver. Meticulously planned and quickly tracked (the Elkingtonian way), it includes Wintres Woma alumni Nick Macri (James’ longtime bass colleague) and Macie Stewart (violin), plus new recruits Lia Kohl (cello), Spencer Tweedy (drums), The Weather Station’s Tamara Lindeman (vocals), and the prolific Paul Von Mertens (Brian Wilson) on woodwinds. Where the first record was more firmly situated in the sonic tradition of England’s more interesting 1970s folk revivalists, Eye engages in a broader wrassle, roping in echoes of British library musics, horror-film soundtracks, demure psychedelia, and more rocking elements of folk-rock. The result is a record even more elaborate, shrewd, thoughtful and confessional than its predecessor. Ever-Roving Eye is instead a sublime distillation of the humane wisdom of a dude who’ll never be; the dude who sings on the single, “Nowhere Time”: “There’s a master plan somebody understands / And I wish that one was me.” It might well cast a pox on the concept of satisfaction altogether. Though it still satisfies the hell out of me”. Nathan Salsburg, December 2019