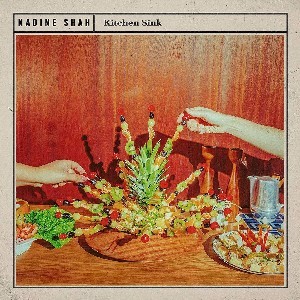 Kitchen Sink follows up Shah's Hyundai Mercury Prize nominated 2017 album Holiday Destination which received critical acclaim including AIM Awards 'Independent Album of the Year', a #7 'Album of the Year' from BBC 6 Music and #5 from The Quietus as well as prominent positions in lists from Loud and Quiet and The Line of Best Fit.

With the same ferocious determination and distinct voice Shah now turns her sights closer to home with an album that explores her own story as a woman in her 30's and the societal pressures and expectations that come with that. Jovial and playful at times, unblinkingly daring at others - Kitchen Sink is bursting with Shah’s beloved personality while simultaneously refusing to compromise on the social commentary that she continues to deliver so fearlessly. Once again produced by Shah’s long time collaborator Ben HillIer.

Darryl says: Nadine's superb fourth album is an atmospheric blend of warm PJ Harvey style vocals, moody guitars and groovey rhythms. The album is an razor-sharp observational piece on the expectations of a woman in her 30's and all the pressures that come with it.