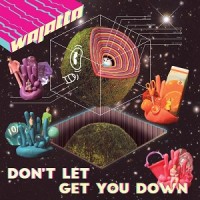 Wajatta (pronounced wa-HA-ta) - aka Reggie Watts and John Tejada - return on Flying Lotus’ Brainfeeder imprint. Coming from different worlds but sharing a passion for the rich history of electronic music, beat-boxer / comedian / musician Watts and electronic music artist / DJ / producer Tejada bring out the best in each other’s formidable skill sets. Exploring the intersection between influences and innovation, the two describe Wajatta’s music as ‘electronic dance music with its roots in Detroit techno, Chicago house, ‘70s funk and New York hip hop.’ It’s a sound that is both familiar and wholly original and, like all great dance music, ultimately life-affirming. As a result, the 11 tracks on “Don’t Let Get You Down” crackle with the energy of fresh ideas captured at the moment of inspiration. It’s electronic music made organically, from two masters at the top of their respective games.

Barry says: It would be hard for anything to get you down after listening to the title track of this killer collaboration, and the rest of the album only continues in the same vein. Owing as much to early instrumental hip-hop as it does modern soul and electronica, this is a rich and varied outing and one you have to hear to believe. Grooves for DAYS.