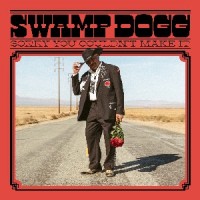 'Sorry You Couldn't Make It' is the long awaited "country album" from the legendary Swamp Dogg. Recorded in Nashville, featuring John Prine, Justin Vernon, Jenny Lewis, and others. Jerry Williams’ aka Swamp Dogg first love was country music, listening to it as a Navy family kid growing up in Portsmouth, Virginia. “My granddaddy, he just bought country records out the asshole,” Swamp remembers. “Every Friday when he came home from the Navy yard he’d stop off and get his records. His first time performing on stage, in fact, was a country song at a talent show when he was six years old: “I did Red Foley’s version of ‘Peace in the Valley.’”

While the 77 year-old Williams’ most enduring persona is the psychedelic soul superhero Swamp Dogg a musical vigilante upholding truths both personal and political since 1970’s immortal album, Total Destruction To Your Mind he will tell anybody who will listen that he’s considered himself country this entire time. “If you notice I use a lot of horns,” Swamp says. “But actually, if you listen to my records before I start stacking shit on it, I’m country. I sound country.” Swamp began his professional singing career as Little Jerry Williams back in the ‘50s before working as an A&R man for Atlantic Records in the late ‘60s. His biggest hit is actually a country song: 1970’s “Don’t Take Her (She’s All I Got).”

Written with his best friend Gary U.S. Bonds. Following 2018’s critically acclaimed, Ryan Olson-produced Love, Loss, And Auto-Tune his first LP to debut on 11 Billboard charts (including at #7 on 'Heatseekers’) and his first chart ink since his 1970 song “Mama's Baby Daddy's Maybe”. Sorry You Couldn’t Make It allows Swamp to finally dive into the sound he grew up playing. With the support of Pioneer Works Press, they recorded the album at Nashville’s Sound Emporium with Olson as producer once again, and backed by a crack studio band led by Derick Lee, a keyboard virtuoso who worked as the musical director of BET’s Bobby Jones Gospel Show for nearly four decades. Nashville guitar firebrand Jim Oblon combusts his way through lead duties, while frequent collaborator Moogstar and special guests Justin Vernon (Bon Iver), John Prine, Jenny Lewis, Channy Leaneagh and Chris Beirden of Poliça, and Sam Amidon join the action throughout