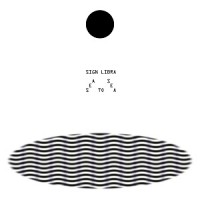 Sign Libra is the sigil under which Latvian composer and artist Agata Melnikova delivers her mystical, musical musings. "Sea to Sea", Melnikova’s sophomore album, operates at the node between cerebral and celestial, the complex and magnificent systems of our immediate and greater cosmos arranged into exquisite and eccentric sound patterns. "Closer to the Equator", Melnikova’s debut album (originally released on Sounds of the Dawn, and then Antinote), was composed for a contemporary ballet choreographed by Milana Komarova and performed at the Latvian National Opera in Riga. A microcosmic rendering of rainforest activity equally informed by BBC nature documentaries, "Closer" introduced Melnikova’s penchant for impressionistic, pseudo-anthropological and intimately synthesized environmental visions, executed with detailed and balanced arrangements.

For "Sea to Sea", Melnikova surveys a different, satellite scenery: the “seas” of the moon’s surface, known collectively as Lunar Maria. These large, dark plains formed by volcanic eruptions were thought to be actual seas by early astronomers. On "Sea to Sea", Melnikova studies the philosophical and mythological nature of this surreal landscape, framed by the illumination of the sun, the shadow of the earth, and the personal perceptions of its inhabitants. The moon becomes an inseparable half of the holistic of make-up our world, and its gravity guides "Sea to Sea".

Across the LP's nine songs, each dedicated to a different liquid expanse, Melnikova’s deft and dancerly arrangements articulate themes of abundance and peace, curiosity, bliss, mystery and mastery, all in Libran balance. Her singular voice appears throughout in repeated, mostly-wordless refrains, a narrator of the performance of life, unfolding continually and infinitely. Between these refrains, a language forms and reminds us what we have learned, and what we have yet to learn, before echoing away into distant waters and galaxies.

On behalf of Sign Libra, a portion of proceeds from this release will benefit Music Fund, an organization that gives young people living in conflict zones and/or poor regions the chance to practice music in suitable conditions