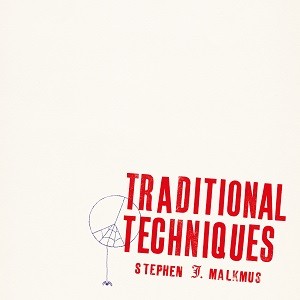 Traditional Techniques, Malkmus’ third solo LP without the Jicks (or Pavement), is new phase folk music for new phase folks, with Malkmus as attuned as ever to the rhythms of the ever-evolving lingual slipstream. It’s packed with handmade arrangements, modern folklore, and 10 songs written and performed in his singular voice. An adventurous new album in an instantly familiar mode, Traditional Techniques creates a serendipitous trilogy with the loose fuzz of the Jicks’ Sparkle Hard (2018) and the solo bedroom experiments of Groove Denied (2019). Taken together, these three very different full-lengths in three years highlight an ever-curious songwriter committed to finding untouched territory.

Malkmus took on Traditional Techniques as a kind of self-dare. Conceived while recording Sparkle Hard at Portland’s Halfling Studio, Malkmus had observed the variety of acoustic instruments available for use. The idea escalated within a matter of weeks into a full set of songs, and shortly thereafter into a realized and fully committed album. When he returned to Halfling, Malkmus drew from a whole new musical palette--including a variety of Afghani instruments - to support an ache both quizzical and contemporary. The resulting Traditional Techniques is expansive and thrilling. Alongside gorgeous folk music, there are also occasional bursts of flute-laced swagger, straight-up commune rock (“Xian Man”), and mind-bending fuzz.

Centred around the songwriter’s 12-string acoustic guitar, and informed by a half-century of folk-rock reference points, Traditional Techniques is the product of Malkmus and Halfling engineer/arranger-in-residence Chris Funk (The Decemberists). Additionally, Matt Sweeney (Bonnie “Prince” Billy, Chavez) plays guitar throughout.