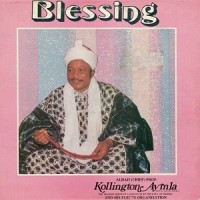 Kollington Ayinla’s celebrated 1978 album "Blessing" is a rare lost classic of Nigerian Fuji music and features Ayinla’s sharp political lyrics together with his new band Fuji ’78. "Blessing" blends the heavily percussive style of Fuji music with a stunning array of modern instruments, including synthesizers, Bata drums and guitars, to create one of the most forward-thinking and heavily danceable sounds ever to come out of Nigeria - a highly successful mixture of profound Fuji rhythms and Fela Kuti-style Afrobeat.

Kollington Ayinla ranks alongside his friend and competitor Ayinde Barrister as the two most important artists to dominate Fuji music from its inception in the 1970s through to the 1990s by which time it had grown to become one of the most popular dance genres in Nigeria. At the start of the 1980s Ayinla started his own record company, Kollington Records, to release his music and remains to this day an extremely prolific artist, having recorded over 50 albums, most of which have never been released outside of Nigeria.

This is a one-off pressing (1000 copies) of this unique piece that has only ever previously been released in Nigeria.