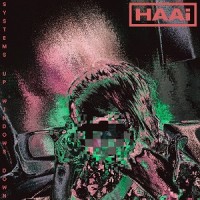 A need for experimentation, exploring new sounds and new ways of making music - the inspiration driving Mute’s newest signing HAAi: the Australian-born London-based DJ who continues an incredible couple of years by announcing her first EP on the prestigious label. Inspired by a chance trip to Berghain, HAAi started DJing by digging into a wealth of music on the psychedelic spectrum from around the globe. Her Coconut Beats parties in Dalston led to shows on Rinse FM and Worldwide FM and eventually to a prestigious residency at the London club Phonox where Throssell played Saturday nights for two years. As her residency came to end, BBC Radio 1 broadcast her Essential Mix which went on to win the accolade of the Best Essential Mix Of The Year, alumni of which include Helena Hauff, Caribou, Nicolas Jaar and Ben Klock. HAAi was then granted a monthly Radio 1 slot, which continues into 2020.

The new release, "Systems Up, Windows Down", feels like an evolution from the previous releases on her own label. With a more mature, dancefloor focused sound, full of heavy basslines, breaks and crisp percussive electronics, she has experimented more and pushed the boundaries of her production. The opening track includes the revving of her stepdad’s 60s Mustang engine on "It's Something We Can All Learn From" she uses an almost forgotten artefact from a trip to Marrakech and "CHONKIBOI" is grounded in an earwormy ritualistic vocal. "6666" was initially composed for the Genesis stage at Glastonbury and has since grown to be a monster of a tune, adding a tougher element to the EP. The closing track is a ten-minute burner which has been garnering love over the summer festivals.

Matt says: Never has an artist caused so much joyful, arresting discomfort as HAAi! Reminiscent of just how little sense Modeselektor made (but how much fun they were) when they first burst onto the scene, and making me feel painfully old by simply not already being up on this cat; HAAi should be what every kid across the country is pissing off their parents with. Incredible.

Don’t Flatter Yourself Love
Stop Looking At Me Swan
6666
CHONKIBOI
It’s Something We Can All Learn From
Systems Up, Windows Down

The Chemical BrothersOut Of Control - 21 Minutes Of Madness Mix