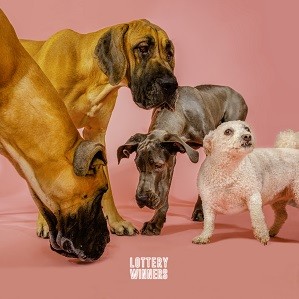 After being discovered by music industry legend Seymour Stein (who famously signed Madonna, The Ramones, Talking Heads and many more,) Lottery Winners have spent the last two years recording tracks for their debut album….a complete labour of love, with a longer than planned delay due to the well-trodden path of record label disputes and the lengthy process of taking back control. The album was produced by TristemIvemy (Frank Turner, The Holloways, Beans On Toast) and mastered at Abbey Road.

Starting in the pubs and working men’s clubs of Lancashire (including the legendary Phoenix Nights) this fierce foursome has truly grafted to reap the rewards. Now signed to Modern Sky UK , 2019 has already seen Thom, Kate, Rob and Joe winning over a slew of new fans, winning the hearts of audiences across the UK and Europe, with support slots for the likes of Catfish and the Bottlemen, Madness, Larkins, The Libertines, Circa Waves, Sleeper, Cassia, Paul Heaton, and a storming Glastonbury debut in June.

Lottery Winners is made of real flesh and bones. It’s made of working-class Britain. It’s made of self-deprecation, dire deprivation and true dedication. Their live shows explode from the stage and stay in the minds of the audience, buried in there forever. They always come back. This is your new favourite band, whether you know it yet or not.

The Lottery WinnersSomething To Leave The House For