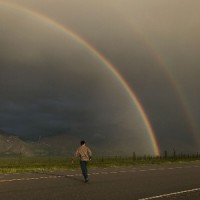 Kevin Krauter’s newest album, ‘Full Hand,’ determines to be a vulnerable and honest statement from an artist exploring the boundaries of their craft. Following his 2018 debut, Krauter’s second full-length album picks up where ‘Toss Up’ left off but at a noticeably more intentional pace. The epic and driving “Opportunity” opens the record with fluttering keys and distorted guitars lying underneath Kevin’s heavenly falsetto. Album highlight “Surprise” is a dreamy and distorted treat full of religious allegory and self-reflection. He sings on “Pretty Boy”: “Look ahead, say I see me now. Smiling at what used to stress me out,” wiser and brighter, ‘Full Hand’ reveals Kevin’s newfound sense of self-acceptance and personal growth." "...Having built upon his foundations, Krauter's debut points to a bubbling potential that is, once more, likely to outdo itself in the not so distant future." Loud & Quiet. //

On his sophomore album, Full Hand, Indiana musician Kevin Krauter tackles complicated emotional states and ideas through elliptical songwriting that is at once poetic and truthful. “A lot of the lyrics touch on how I was raised religiously, touch on me understanding my sexuality more and more in recent years,” Krauter says, “just growing up and becoming more confident in myself...that process of looking inward and taking stock of myself.” It’s not especially uncommon for artists to probe deep into their own psyche to uncover what makes them tic, but Krauter’s light touch feels like something all his own.

On the album’s first single, “Pretty Boy,” he sings, “Look ahead, say I see me now / Smiling at what used to stress me out / Cause it won’t be too long, but I’ll take my time with it / It won’t be too long till I come back home.” There’s a palpable sense of joy in Krauter’s acceptance of dire, stressful moments, and a liberation that comes from hearing him realize that the present will eventually be the past, and he’ll be able to look back and find peace.