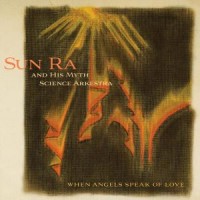 This 1963 set establishes Sun Ra's Arkestra as a New York band, sonically coupled to developments in the decidedly urbane downtown arts underground.The stargazing clamor of the music reflects the intensity of a cultural crossroads where concrete and dust pervade any skyward view, from East 3rd Street to Mars and beyond. One of Sun Ra's rarest releases, it had negligible circulation through shops. While most of the Saturn output couldn't get any rarer or mysterious than it already was, 'When Angels Speak of Love' was released in 1966, it was the most elusive and mysterious in the Sun Ra catalog. It's speculated that the record was issued in two micro runs, with estimates around 150 copies. Hard core collectors around the world had been searching for this gem to no avail until Evidence Records' released a CD of the music in 2000. This updated offering utilizes the actual master tapes and we get to hear the Arkestra in its cosmic mid-60's prime via mono and stereo fidelity. Features three additional stereo tracks, with liner notes by jazz historian Clifford Allen.