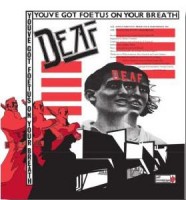 Foetus is the brainchild of acclaimed Brooklyn-based composer JG Thirlwell. Thirlwell is known for his solo sets with electronics, sound installations, composing string arrangements, remixes, commissions, and soundtracks, and has collaborated or arranged for a wide variety of artists including Karen O, Noveller, Zola Jesus, Melvins, Swans, Nine Inch Nails, Lydia Lunch, Coil, Z's, The The, Simon Hanes, Nick Cave and many more. DEAF was the first album by JG Thirlwell as Foetus. Originally released in 1981, it's a wild eccentric collision of ideas and mania from music concrete, funk, no wave to noise. DEAF was released on Thirlwell's Self Immolation label and has been out of print for 30+ years.