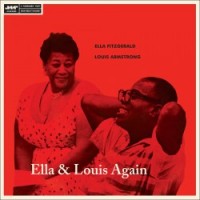 Ella & Louis Again marks the second album produced by Norman Granz (on his Verve label), pairing Ella Fitzgerald and Louis Armstrong. After recording a series of duets in the late 1940s for the Decca label, they were summoned by Granz in 1956 to cut sessions that would result in the memorable Ella and Louis. Such was the success of the LP, that the formula was repeated the following year with the making of Ella and Louis Again. (Their third and final album for Granz would be a version of Gershwin’s Porgy and Bess). To get such marvellous results, Granz surrounded the stars by almost the same superb quartet that had backed them on their previous LP: Oscar Peterson on piano, Herb Ellis on guitar, Ray Brown on bass, and Louis Bellson replacing Buddy Rich on drums. While the first album only included duets, “Ella and Louis Again” was first issued as a double-LP set that also contained some songs performed individually by either Ella or Louis. This extended single-LP edition compiles all their duets from these sessions, while discarding all the songs on which either Ella or Louis sit out.

Don’t Be That Way
They All Laughed
Autumn In New York
Stompin’ At The Savoy
I Win’t Dance
I’ve Got My Love To Keep Me Warm
Gee, Baby, Ain’t I Good To You
Let's Call The Whole Thing Off
I'm Puttin' All My Eggs In One Basket
A Fine Romance
Love Is Here To Stay
Learnin' The Blues