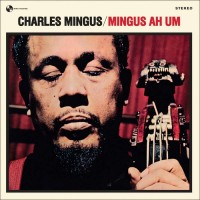 Featuring an all-star group including Jimmy Knepper, John Handy, Booker Ervin and Curtis Porter (aka Shafi Hadi), Mingus Ah Um was Charles Mingus’ first LP for Columbia. By the mid-50s, Mingus had formed his own publishing and recording companies to protect and document his growing repertoire of original music. He also founded the “Jazz Workshop,” a group which enabled young composers to have their new works performed in concert and on recordings. One of those albums was “Mingus Ah Um”, an extremely personal work that once again showcased Mingus’ unique talent for breaking new ground. The composition “Fables of Faubus” is one of Mingus’s most explicitly political works, a song written as a direct protest against Arkansas governor Orval E. Faubus, who in 1957 sent out the National Guard to prevent the integration of Little Rock Central High School by nine African-American teenagers.