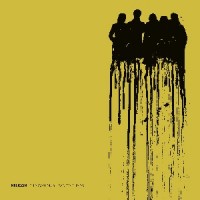 Glaswegian psychedelic heavyweights Helicon are soon set to release their second album, the aptly- titled ‘This Can Only Lead to Chaos.’  it follows on from their 2017 self-titled debut and a recent three-track ‘Zero Fucks’ EP, released earlier this year. A 9-track effort, it sees the band delve even deeper into their self-confessed “evil psych rock with smatterings of sentient sitar” - coming out of the other end with something more raw and heavy, and far closer to the all-consuming live show that they’ve spent the last decade frying minds with. As angry and acerbic as ever, vocalist and guitarist John-Paul Hughes says of the themes explored on the album: “We are living in unprecedented times.

This age of greed, individualism, fear, ignorance and manipulation of the masses has brought us to the point we are electing predatory liars and con men who bully and discriminate, then wear it as a badge of honour. They encourage and embolden others to follow suit then wash their hands of the consequences like some fucking modern-day Pontius Pilate and his privileged prick pals. We live in a society that denies climate change. We make stupid people famous. The Sun is the best-selling newspaper. Ed Sheeran is named ‘artist of the decade’. There are more food banks than McDonalds in the UK. The whole shit house is going up in flames whilst fuckwits watch Love Island and flick through which filter to apply to their latest selfie.”

As such, JP says the album – made at Glasgow’s Anchor Lane Studio with Luigi Pasquini (The Cosmic Dead, Trembling Bells, Acid Cannibals) – is inspired by “the rejection of mediocrity and mundanity. A shared spirit of rebellion that things can be better and the fucking balls to make it happen.” So, how do Helicon go about sticking a finger to the mediocre? Through a shape-shifting blast of transcendental sitar, oscillating synths, motorik basslines, echo-soaked vocals and huge walls of guitar thick with phaser and fuzz, cranked all the way up to 11. On their new album, Helicon have emerged with a record that sees them at their most forthright and ambitious and–delivered with the kind of wit only five disgruntled Glasweigians could muster–it couldn’t have arrived at a better time