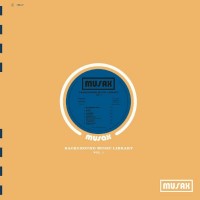 For this first volume of Musax Background Music Library, Farfalla Records continues exploring the maze of the french library music through one of its most discreet and prolific representatives: Jacky Giordano and one of his many projects, the Musax label.

Patrick says: Killer selection of grooving jazz funk, psychedelic sounds and electronic ambience revived from the archives of the Musax library, including the incredible "Man Fly" by Gerard Gesina, which is worth the entry fee alone!