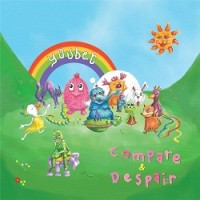 The thirteen songs on youbet’s debut hit like relentless bursts of color. Musically adventurous and lyrically intimate, writer Nick Llobet’s vocals lilt, hiss and command attention. His vision is fully Formed on Compare & Despair, driven by equal parts humor and melancholy. Its bright, shocking cover art depicts a cast of psychotropic cartoon characters, each representing a different song. Raised in Davie, Florida, by his Cuban immigrant father and firstgeneration Italian American mother who divorced, Llobet sensed chaos lurking around every corner. youbet’s sound captures that disorder, a backwards world where the adults act like children and kids are on their own to maintain any semblance of order. Compare & Despair sounds like returning to your hometown to rewrite the narrative of your youth with attitude and a confetti cannon. Recently arriving in New York, Llobet discovered music as a creative and therapeutic outlet. He began writing obsessively. “It’s my way of getting lost,” says Llobet.

Depositing what he made on a Bandcamp page, the result was an assortment of disparate ingredients: the sound of his laugh tape-sped to surreality, a birthday song about carnitas for his step mother, fuzzed-out rockers that snuff out before they seem to begin. And then there were these beautiful, complete compositions that recalled the ingenious simplicity of Big Star or Elliott Smith. His page caught the attention of Ava Luna drummer and engineer Julian Fader (Frankie Cosmos, Mr. Twin Sister), who shared it with collaborator Katie Von Schleicher. Katie contacted Llobet, offering to help him produce and release a full-length album. A core group was formed of Llobet, Von Schleicher, Fader and Adam Brisbin (Sam Evian, Molly Sarlé), all of whom contributed over the next year to Compare & Despair. youbet makes the music of idealized youth and time-bombed birth. With a pure aim of freedom, but forever hindered by encroaching adult reality, Compare & Despair thrives in creative conflict. A stunning debut of intent, youbet sets loose a hyperactive imagination that rides the rainbow into a black hole.