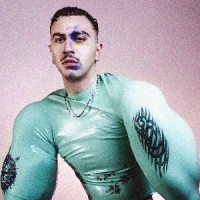 “I love songs that make you want to cry and dance at the same time,” says Tony Donson, the London-based musician who records as SONIKKU. That sense of unfettered release and liberation drives his new album, Joyful Death. A fluent, fertile and full-colour hybrid of vibrant Italo-house, liquid synth-pop, righteous disco and French philosophical asides, it’s an album that signals the emergence proper of SONIKKU – a fully formed dancefloor artist. It’s also a farewell of sorts, perhaps, but with an emphatic rebirth at its heart. “This album feels like a transformation in the sense that I’m creating the music I’ve always wanted to make. A fully realised, coherent pop record that showcases my craft as a song-writer and producer.”

Total control of his craft is swiftly asserted on ‘Let the Light In’, where the influences of lost-in-music disco and the Pet Shop Boys merge under vocals from immersive, exploratory British singer-songwriter Douglas Dare. The pace accelerates as ‘WKND’ gets into a groove pitched somewhere between Madonna, Daft Punk and Indeep, with LA future-pop singer LIZ primed for dancefloor abandon on vocals. Meanwhile, SONIKKU’s independent intent is firmly asserted on the freestyle-inspired ‘Don’t Wanna Dance with You’, where singer Aisha Zoe coolly brushes off unwanted advances in favour of dancefloor pleasures.

Pummelling synths signal a dramatic shift of pace on the almost electro-darkwave dash of ‘Remember to Forget Me’, where actor/singer Chester Lockhart presides over a summit meeting between Depeche Mode and New Order. Performance artist Tyler Matthew Oyer takes the vocals for the Italo-disco-inspired title-track, a vividly imagined album manifesto – of sorts – inspired to varying degrees by an 1892 poem, French thinker Gilles Deleuze’s concept of the “body without organs” and a 1997 anime called The End of Evangelion. Finally, that grand piano takes over as Dare returns, presiding over an achingly stripped-back version of ‘Remember to Forget Me’.

With help from friends and artists he admires on vocals, Joyful Death is a hugely confident and self-contained leap forward for SONIKKU after his time as a feted DJ. Having moved from Derby to London at the age of 18, Donson worked as an intern (at MTV, Dazed & Confused, SHOWstudio and elsewhere) then turned to DJing (from London to Tokyo, Paris and Berlin) after he was signed to London label Lobster Theremin. Though he continues to DJ regularly at Tottenham’s LGBTQ rave-up Adonis, he has extra ambitions in mind: “I love DJing but I’m more looking forward to developing a live show.”