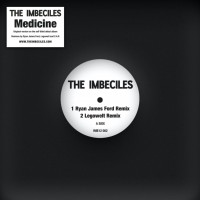 Medicine used to be, we expected, good for us. Albeit with added sugar. Now medicine is a huge problem in itself, with vast companies caught mis-selling dangerous drugs. It’s one of the biggest scandals ever. How on earth did we get here? Who did this?

The Imbeciles are on the case.

“It’s about the dark side of prescription ‘medicines’. Oxy, Xanax, Ambien, all that. Big pharma is pushing these addictive ‘medicines’ that we don’t actually need, to desensitise / numb / kill. All for profit,” says Butch Dante.

A new classic from The Imbeciles. They know. And they made a video. Watch it here.

Now they’ve been remixed. By these people:

C.A.R.:
Impossible to categorise, and all the better for it - London based, Franco-Canadian, C.A.R., flirts with elements of new wave, cold wave, synth-pop, post punk and off-kilter disco; and without doubt wields some of the most satisfyingly other-worldly melodies and synth lines around.

Ryan James Ford:
One of the most exciting underground techno producers on the block - Ryan doesn’t constrain himself to any one rhythm, aesthetic and motif, but can always be found to be hitting the listener with thick atmosphere, dark melodies and an upfront, experimental attitude.