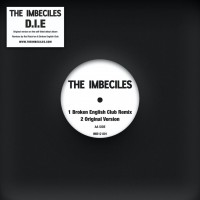 This is the music for our times; our darkening times. The Imbeciles are making the soundtrack for the world we really live in, which is set to become increasingly angry, unhappy, unfair, and messed up. “The world is slowly imploding.” That’s the warning from The Imbeciles, and the message behind its first album. The idea of what to do emerged like a surprise attack.

“I don’t even know where it came from… it ambushed us,” says Butch Dante, of the band’s forthcoming self-titled debut album. “To us it looks like mankind will endgame itself in this millennium, and probably within the next 100 or 200 years. The Imbeciles as harbingers of that fall. We’re pointing out that the world is imploding, for many reasons — environmental, political, technological, and ultimately because human beings themselves forgot how to be humane, how to be kind.”

“Saying we are political would infer that we have some faith in the political system. We don’t. Or that we have answers, a solution to prevent this coming slow apocalypse. But we don’t. We are sitting at the side of an innocent-looking pool saying: hey, you’re drowning but you don’t even know it. And we’re giving you some music to listen to as you go down.”

Inspired by the likes of Wire, Devo, Gang Of Four, but utterly unique, a new form of avant-garde art punk, against greed and mendacity. The band’s forthcoming album was recorded deep down at Sonic Ranch on the Texas/Mexico border. All analogue, in seven days. Produced by Calvin Voltz.

Latest single “D.I.E.” is “a lament for the end of the world. With references to global endgames. They’re grim. All self-inflicted. The chorus is epic when played live. It’s incredibly passionate. People really get into it.” And now it’s been remixed.

Red Rack'em's take on is wonderfully curveball as one might expect; homing in on one unique part of the vocal and making it the fullcrum, from which his psychedelic, deep-house, hardcore jazzathon is then able to blossom and unravel before your very eyes. Atmospheric, experimental and hooky too - clever business from the Bergerac boss.

Next up we have the amazing Oliver Ho and his Broken English Club. Here we witness a more flagrant and faithful use of stems, and through layering both the band's parts, and instruments of his own design - he transforms 'D.I.E.' into a towering slab of dark and raw, industrial EBM.