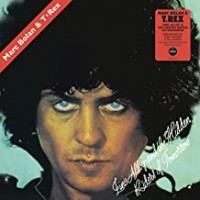 Zinc Alloy and the Hidden Riders of Tomorrow is the 1974 album by Marc Bolan and T. Rex. The album was preceded by hit singles “The Groover” and “Truck On (Tyke)” includes the follow-up hit “Teenage Dream”. The results of listening to black radio stations whilst touring the US during 1973 are apparent on this album, something of an oft-overlooked treasure trove.

• This is edition has been pressed on 180g clear vinyl for the first time and has been remastered by co-producer Tony Visconti and Ted Jensen.