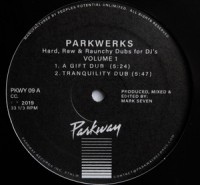 Mark Seven's Parkway series makes a triumphant return! The highly respected producer / DJ / remixer saves some of his best pieces for this label and packing four hot new tracks, there's somewhat of a furor around this latest release!

Kicking things of in tradition MS fashion, "A Gift Dub" sees his patented boogie drums rattle and shake through darting keyboard stabs and the occasional piano refrain. Add some funky perc patterns and a rugged bottom end, plus a shed ton of tape delay and you've got one of those early evening burners just primed to get the crowd warmed up... Yes Mark!

"Tranquility Dub" utilizes much the same palette for a nocturnal, paradisiacal trip that reminisces over the very first Petrcane site in Croatia with its palm-flecked licks and star-lit groove - magical.

"No Time Dub" and "Secret To Success Dub" both grace the flip side with the kinda rock solid boogie-house we've come to expect from Mark Seven. Drums that could chip chunks out of caves, synths squelchier than being slimed on the Big Breakfast and sweeping tape delays that take you off into the stratosphere!

There's no one quite like Mark Seven and this new EP is sublime - check!