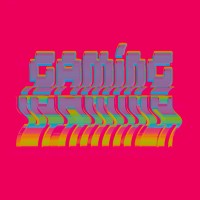 Gaming is a new solo outing that brings together a lifelong love of music and technology and creating leftfield, rhythmic electronica. It’s the sound of IDM, nineties techno and mensch maschine computer music that is as spontaneous as it is programmed.

This is DIY electronica from Glasgow - it was made on a growing collection of digital and analogue synths and FX units, including a bunch of modular racks, each with its own idiosyncrasies and character that belies the assumption of the binary.

The studio where it was recorded - an abandoned, and often very cold, school building reclaimed by the community some twenty years ago - offered up stories of resilience, giving the recording process a subconscious context and alternative environment

'This album is ultimately about my changing relationship with Glasgow, a city I’ve lived in for more than 25 years. It’s about how I feel now about the increasing sense of urban decay and how the city can be a very isolating place. It’s about how I reflect on my younger creative self trying to find a direction but mainly feeling a sense of dislocation and not fitting in. And it’s about the questions I have about how that relationship is changing, how it will be forced to move forward.

The result is a soundtrack for walking home on your own, in that headphone bubble when it’s just you focusing on that music that makes sense to you alone. It’s for early in the morning, after the night before, or going to work with the memories of that slipping and sliding inside your head. It’s about how it feels to be both elated and lonely, to be lost in the familiar, despairingly hopeful.' - Gaming.