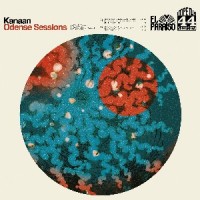 With their 2018 debut album, ”Windborne”, Oslo based trio Kanaan quickly established themselves as one of the most important groups in the youngest generation of psychedelic impro-rockers. As accomplished players – all three educated in jazz – they marry fiery energy with musical intricacy, and possess a rare ability to balance power and Delicateness. They devote as much energy to exploring airiness and atmosphere as they do to intensity. On this set the trio join forces with Causa Sui guitar player and producer Jonas Munk, for a series of semi-improvised sonic excursions. Recorded in Jonas Munk's Odense studio, where most of the El Paraiso magic happens, the band explores a looser side of their sound. Jonas Munk joins on guitar on every track, and occasionally synths as well, unlocking new modal possibilities and a Grateful Dead-esque dual-guitar flow that suits the band well. These four tracks unfold in a panoramic slow burn, only occasionally exploding in blazing leads. They know just when to hold back and when to let loose. On the final track, ”Urgent Excursions To The Tundrasphere”, the four eventually let it all rip, creating a complete sonic meltdown. For fans of freeform psychedelic rock this is as essential as it gets