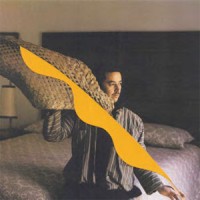 Kyson is a self-titled sonic memoir that jailbreaks Kyson’s repertoire through a depth of narrative and tactile instrumentation. Where he ensconced his other releases in escapism, this one by design hits you in your soul.

The album’s title is particularly significant. Kyson’s stage moniker was his nickname as an infant. His free-spirited parents (mom is English; dad, Malaysian) couldn’t decide on a name after his birth, so they temporarily called him Kysanwith “Ky” taken from his father’s name and “san” meaning son. As Kyson got older, his father exposed him to Asian culture, but he showed a lack of interest. It took the passing of his paternal grandfather to awaken a desire to learn more about his Chinese-Malay roots.

“This album,” he notes, “is really about how curious I have become.” The album artwork and packaging comes courtesy of German artist BD Graft in his ‘Add Yellow’ style with images from Kyson’s upbringing. Kyson got his start when he won an official Bon Iver remix completion with his version of “Holocene.” This sparked Kyson’s love for tinkering with effervescent, hip-hop soundscapes and production which eventually evolved into Kyson realizing his potential as a solo artist. Pitchfork has credited his music as “exotic but familiar” and Stereogum as, “forward-thinking arrangements with sleek electronic elements.” “I try to make music ever day- I want to be there when the inspiration comes.” says Kyson, the synth-shaman of teleporting sounds. “There are no borders to what you can do. It’s limitless.”

LP1:Last Moon
One And Other
Driveway
Body
After The Rain
The Boy
Penang Stories
Innocence Arrogance
Calibrate
Bliss
Slowdown
Elsewhere