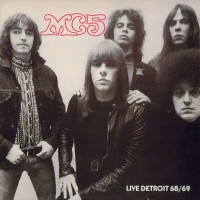 Discover the raw energy of MC5, a pioneer band of punk rock and hard rock.