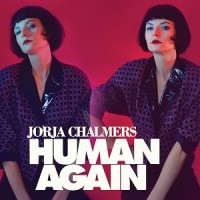 From Bryan Ferry’s side on stage for the past decade to lighting up your night sky with a neon symphony, Jorja Chalmers’ debut album Human Again is here…Beware!

In 2004 Jorja Chalmers moved to London from Sydney, Australia with zero cash, her saxophone & a massive crush on an English boy she met while he was visiting Australia. Fast forward 3 years later… Bryan Ferry’s assistant caught Jorja performing at a nightclub in London. The next day she received a message inviting her to audition for his band. She met Ferry at his studio, played some Roxy Music tunes & as anyone who has caught one of Ferry’s live shows of the past 10+ years knows, has been a salient addition to his band ever since.

Human Again was written & recorded by Jorja in hotel rooms after performing Roxy Music & Bryan Ferry songs drenched in sweat each night. Finishing touches were added & distilled inside Ferry’s London studio & then brushed by Johnny Jewel’s glittering hands with Dean Hurley at the legendary Asymmetrical Studio in the Hollywood Hills. The combination is intoxicating. Human Again bottles that stark loneliness the artist faces night after night on the road. Sonically, the album explores the spaciousness alive inside the minimalism of Bowie & Eno’s Low, her vocal reflects early Laurie Anderson alongside the troubled smoke of Badalamenti’s score for Lost Highway, & the impeding doom of Goblin. Chalmers embraces the claustrophobia of a John Carpenter film cut with the patience & precision of Amon Duul. The quest to be Human Again is to be a stranger in a strange land.

In ‘Red Light’ metal machine magic grinds as a wish is granted. The saxophone wails, humming a new strain of serpentine song.

The triggered, vast descent of ‘Suburban Pastel’ unfurls as the landscape expands the mystery. This is visual music that slowly coils its wings around the listener.

Jorja’s pale blue eyes glance across the vivid landscape. Suspended in reverie, bathed in sound, adrift until the tidal brass of ‘This Is Where The Night Sky Begins’ calls the dreamer back down to earth.

As the needle drops again, the petal soft synthesizers sprawl toward the event horizon, hypnotized by the distant call of the Siren. Visions of intimacy & sentient contact triggered by endless weeks on tour. The human heart of a Saturday night still beating on Tuesday morning. The album’s closing track ‘Ship In The Sky’ is the heroine’s journey into the unknown, without a compass.