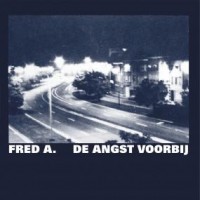 Fred A. was a two-faced act. His musical grasp to the new wave-movement was countered by his lyrical love for Flemish and Dutch ‘kleinkunst’, and his progressiveness as a composer was in stark contrast with his restraint as a performer. ‘De Angst Voorbij’ is an anthology of those remnants, with eight songs derived from the most fertile period in the musical career of Fred A. The record translates how Gerry opened up again to his late musical endeavours, recalling the 30-years younger version of himself. “The music on this record is a testimony of my life back then. It is delimited in time, that’s why this whole feels coherent to me. It shows who I was back then and what I stood for. And that’s worth cherishing