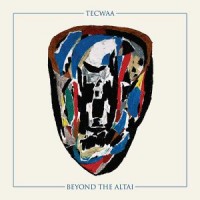 It is a cliché to describe music as a trip or an ocean or whatever, so this album, Tecwaa’s album “Beyond the Altai” released on Höga Nord Rekords, will in part be described as a snowman: the snowman has its characteristic familiar shape. He is cold yet there is something warm and cuddly about him, something that makes you feel happy and safe.

The A side on the album goes from that warm/cold cosy feeling but elements of destruction like melodies in minor keys slowly transforms the album to become only cold and not so cosy - the snow turns grey and the snowman’s smiling mouth becomes a twisted grin. Its contours disappears and the shape dissolves as the snow melts and floats out on the ground beneath its body. As the album develops, the sound gets harder and darker and the York based DJ moves closer to his roots in electro and Roland-machine knob-turning.

In some ways, “Beyond the Altai” is a call from the eighties and nineties dancefloors like in the tracks “Back To The Atomic Ether” and “10 Swords” on the B-side but all melts together in Tecwaa’s music to create his own obstinate and loose sound!