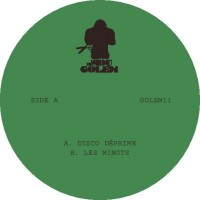 The infamous series returns! Les Edits Du Golem return with a special 7" release featuring two spaced out francophone oddities. On the A-side we have a wonderfully crooned, kinda Balearic and undoubtedly cosmic slow disco burner lamenting an evening getting lost while disco dancing. Think Brel or Gainsbourg attempting some seventies seduction after at least two tabs of acid. On the flip, things simmer down even further with a doped out dad rock track complete with proggy space whistle, nebulous pads and the slowest of drumbeats.

Celebrating over a decade in the edits game, Les Edits Du Golem can always be relied upon to bring forth the obscure! Recommended.

Patrick says: It's always a good day when a new Edits Du Golem drops, and this 7" edition is a space age smash. Both sides are slow, syrupy and swaying cosmic bombs with a touch of Gallic humour. It's the kind of tackle you'd expect to hear on a Harvey Sarcastic Disco mix.

A. Disco Déprime
B. Les Minots