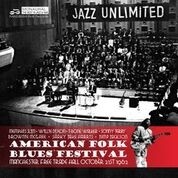 Manchester Free Trade Hall was host to two concerts on Sunday October 21st 1962 that acted as a catalyst to the nascent British Blues & R&B boom, on the verge of breaking out of its suburban home in Ealing, West London. The shows were promoted by Stockport-based Paddy MacKiernan under the Jazz Unlimited banner and attracted a crowd of around two thousand enthusiasts, who saw the first major concert in Britain to feature American bluesmen. Manchester was the only UK date on the 1962 American Folk-Blues Festival tour and it was attended by blues fans from all over the country through what Paul Jones called ‘the bush telegraph’. With Jones were Alexis Korner and Macclesfield-born John Mayall, plus extraordinarily a contingent of younger fans who had made the trip in a clapped out van from London. Why extraordinary? Because the van contained some of the future superstars of the British scene: Mick Jagger, Keith Richards, Brian Jones and Jimmy Page. The Stones by this time had just a dozen gigs under their belts and Page had recently embarked on the first stage of his career as a session guitarist. David Williams dedicates a whole chapter to the road trip in his book The First Time We Met The Blues. “It must have been around early September 1962 when news filtered down the grapevine…We could hardly believe that real blues artists were going to appear here in our country…were regarded somewhat like mystic gods within our circle…(Jimmy Page) realised that he would not be able to make the journey with us as he was already booked to play a gig with Neil Christian on the Saturday night…it was agreed Jim would travel up by train on the Sunday and we would find space for him in the van for the journey back overnight…Graham (Ackers) was a pretty good driver and soon managed to find his way through Central London to a square ...where we picked up Mick, Keith and Brian.” Keith Richards remembers it differently, “Mick sometimes had the use of his parents’ Triumph Herald at the weekend and I remember we went to see a big blues show in Manchester.” Jimmy Page: “When David Williams told me of the impending visit of the initial American Folk-Blues Festival to England, I was keen to join the pilgrimage to Manchester. It was not only the first time that I would actually see artists like John Lee Hooker and T-Bone Walker perform, but it was also the first time I met Mick Jagger, Brian Jones and Keith Richards, who came with us on the trip. We were all like-minded enthusiasts and in those days we regarded the artists we were going to see as idols.” ABC TV filmed the second show and broadcast it in two parts for its Tempo programme. The recordings (from the Newby collection) are of excellent sound quality and were taken off air by direct line into a Tandberg reel to reel recorder.