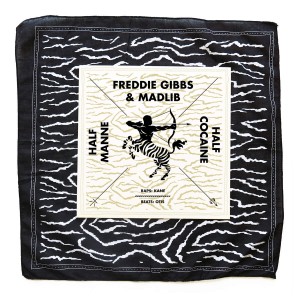 More exclusive 12" hits taken from the most recent Freddie Gibbs & Madlib album: "Bandana". The fiery “Half Manne Half Cocaine” and “Palmolive” both come with instrumentals and also included is two bonus tracks: "Zebras In The Mist" and "Night Vision".

Matt says: Freddie & Madlib: like chocolate and crisps, prosceco and lemon cake and coffee and donuts; has become a well established & very pleasing combo. The Atanta-raised pottymouth and California's most blunted shove two fingers up to rest of the hip-hop industry.