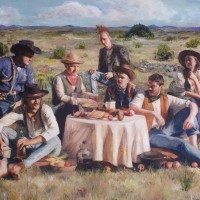 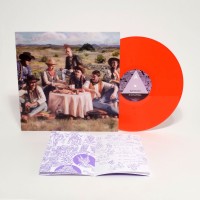 Read below for Henry Rollins’ words on the project.

“Ty's 2019 album, First Taste, and the new Lighting Bolt album, Sonic Citadel, are easily some of the best material either entity has ever released so if these two happened to find themselves in the same recording studio, a fan just might entertain elevated expectation levels. In fact, some might actually show signs of enthusiasm, even excitement at the fact that from July 5 -13, 2018, in the air-conditioning free environs of Ty's home studio, the duo, eventually calling themselves Wasted Shirt, wrecked the joint as thoroughly as you hoped they would.

The album is exploding euphoria from start to finish. The more you play it, the better it kabongs you upside your head. Hectic doesn't even begin to describe it. Brian and Ty, two mere particles in the grand scheme, collide at high speed, the technicians dive for cover, the reaction is recorded. Mutation is achieved. This is Freedom Rock. Turn up the volume. Hasten your emancipation. Sonic joy awaits.”

Barry says: We all know what Ty Segall sound like, and i'm pretty sure we know what Lightning Bolt sound like but this, 'Wasted Shirt' is the perfect example of the outcome sometimes being more than the sum of it's already considerable parts. Heavy af, brilliantly produced and absolutely ram-packed with groove, 'Fungus II' will be blowing minds for some time to come.