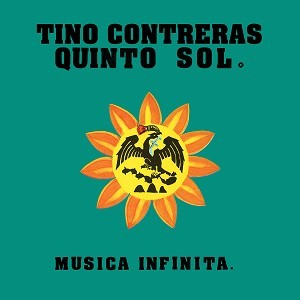 Gilles Peterson launches his new imprint Arc Records with a reissue of cult record “Musica Infinita” by Mexican drummer and composer Tino Contreras. A psychedelic, experimental jazz record, originally released in 1978, it marked a daring step forward by the Mexico City-based musician, and is now re-released for a chance to get the widespread dues it deserves. A limited private press, copies of the original are highly sought after, despite the drummer being much overlooked in both his home country as well as abroad, with a career that started in the 1950s, and which has seen him share stages with many of the greats – including Dave Brubeck, Cannonball Adderley and the Duke Ellington Orchestra.

The story behind Peterson re-releasing the record is serendipitous. Several years ago, he bought a copy before a gig in Japan, and it soon became one of his most cherished discoveries; he was awed by its otherworldly blend of jazz fusion and psychedelia. Years later, booked to play at a festival in Mexico, Peterson was introduced to Carlos Icaza, a record collector and musician, who also had a copy of the record – in fact, he has two – and to whom it was also an extremely special album. To Peterson’s delight, Icaza suggested they meet up with Contreras who, at 95, is still active and based in Mexico City. Soon enough, the three of them were sat down together and agreed upon a plan to re-issue “Musica Infinita”.

The album is the product of a long, varied musical development for Contreras, and of his productive partnership with Estrella Newman, a scholar who championed pre-Columbian culture and Mexico’s experimental traditions, such as the micro-tonalism pioneered by musician and academic Julián Carrillo. On “Musica Infinita”, Contreras filtered these local traditions through an American-influenced jazz lense, his playing and compositions honed through formative experiences seeing the likes of Art Blakey and Shelly Manne, decades of touring internationally, and of being part of a series of orchestras and ensembles central to Mexico’s jazz history.

By the time he recorded “Musica Infinita”, Contreras had been a part of the Luis Arcaraz orchestra, had led a series of outfits to record albums for the Musart label, been part of recordings for the Polydor, Typic and Berta imprints, and had introduced Mexico to the Dominican Republic’s merengue rhythm, through his 1953 recording debut with an orchestra, the ‘Volado por los merengues’ 10”.

The group name adopted for the album, Quinto Sol, reflects the influence of the Aztec Calendar, a concept which Contreras and Newman were inspired to build their shared musical project around. It’s a concept based around an Aztec carved stone structure, known as the Sun Stone, discovered in the late eighteenth century, believed to outline five periods – or suns – which explain the transformations of the earth. Inspired by a nighttime visit to the Pyramid of the Sun, in the ancient city of Teotihuacan, Contreras decided to adopt a group name in reference to the fifth period of the Aztec Calendar. Thus, he picked Quinto Sol – or, “Fifth Sun”.

Re-issued for the first time, it’s a chance to get acquainted with an especially bright moment for an artist whose legacy is surely due for greater attention. Bridging strongly-felt Mexican tradition with a grounding in a primo jazz schooling, “Musica Infinita” channels grand concepts into a visceral musical experience.