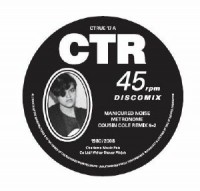 The illusive Manchester Post-Punk/Punk-Funk act Manicured Noise have been figures of intrigue since CTR released the Northern Stories 1978/80 collection in 2006. In their lifetime they released only two 7” on PRE Records & recorded a BBC Radio session for Kid Jensen. These tantalising hints at what could have been found their way to the turntable of New York's Cousin Cole, who digitally flipped the post punk monster into a hard hitting house varient back in the blog days. Now thanks, to Caroline True, you get that beast on vinyl for the first time.

A remix that’s hard to pigeonhole-Sax-Banger? Post-Punk--Funk? But one that has been featured heavily by DJ luminaries such Ben UFO (Hessle Audio) & Job Jobse at Dekmantel where the track ruled the evening back in 2017 & again this year. It’s grown in popularity totally organically across Europe’s more discerning dancefloors & has many admirers.. Flip it for another wavy gem in the form of Matt Wedderkopp and James Taylor's mix of "Moscow 80" - a chilly play for any advanced DJ.