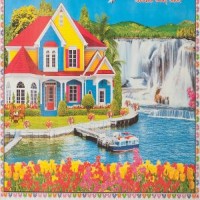 Very Ltd Edition 12"EP on this highly intriguing label.. musical, captivating and a more than a bit nuts. BIG TIP!

Hailing from the Ruhrgebiet and now based in Cologne, sound enthusiast and percussionist Tulips is cofounder of the free-wheeling improv kraut group NASSSAU, plays together with TRJJ (of Belgium’s Stroom crew) in the duo P.VEE, and is part of Cologne’s dub-minded jam hounds MONTEL PALMER.

Produced in his bedroom, the sonic palette for this EP derives from primitive key improvisations to talking percussion worlds as part of extended cosmic excursions to unknown paramós. All tracks on ​Matas Flores y Algo Más ​ were jammed and recorded between late 2018 and early 2019, using an array of digital and analog synthesis, such as the Juno 106 and Yamaha DX7, and the Korg Wavedrum and Pearl SC40.

The opening track ​Self Similar Melodies ​ carries itself with a certain weightlessness, as drifting keys and oscillating bleeps grasp for an unreachable climax somewhere on the horizon. As the synth layers gradually build throughout ​A Bird Feeder, ​ electronic tones chirrup like chaffinches, while the distinct feeling of sunrise breaks through the music.

On the B side, ​Retrograde II ​ winds on a syrupy slow garage lean with bright riffs and interlocking percussive signatures. The marimba tones and loping bass of ​Same Scene conjure up tropical twilights from a Ballardian dimension, and the EP closes with Matsutake ​, a twisting rhythm in conversation with itself amid a mirage of lurching synths and pitch-shifting modulations.

A1. Self Similar Melodies
A2. A Bird Feeder
B1. Retrograde II
B2. Same Scene
B3. Matsutake