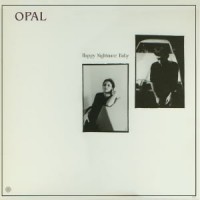 Opal was a band in the mid 80's that were part of the paisley underground scene. Originally called Clay Allison, the band featured David Roback, Kendra Smith and Keith Mitchell. Happy Nightmare Baby was the band's first full-length album. Hope Sandoval joined the band shortly after and they became Mazzy Star. This is a reissue of the long out of print release.