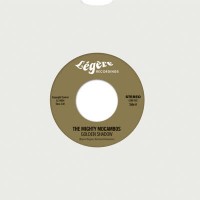 In 2019, The Mighty Mocambos returned in fine form with their new album "2066", played a storming European tour and celebrated a colourful year delivering their own true style of funk, Afro, hip hop with cinematic compositions and storytelling.

The mean streets groove and furious drums versus car chase workout of "Golden Shadow" and the joyous instrumental stomper "Preaching To The Choir" were soon identified as DJ favourites. So here they are on glorious golden 7inch vinyl to jumpstart 2020 with.

1. Golden Shadow
2. Preaching To The Choi

Bacao Rhythm & Steel BandGreat To Be Here / All For Tha Cash