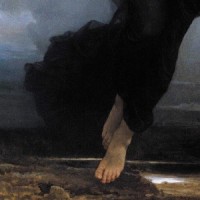 “I’d work on it when everyone else at home was in bed,” says Aidan Moffat of his latest musical project as Nyx Nótt. “I don't sleep very well and I'm very much a nighthawk, so the music I made was naturally nocturnal.” The essence of night and Moffat’s moonlit tinkerings became such a prominent role in the creative process that his new alias had to reflect this too. “I originally planned to release the album anonymously and tried to think of a convincing, exotic name that suited the nocturnal themes of the album. Nyx and Nótt are two mythical goddesses of night, Nyx from the Greek and Nótt from old Norse.”

The album title translates as "At the Feet of Night", so this is an album not simply of, or from, the night, but an ode to it - a sonic worshipping of the night’s pull and allure. Crepuscular music. The result is an album that pulses like the quiet hum of night; the production is clear and crisp with every movement, note and sound augmented with stark clarity - like the amplified sound of a creaking floorboard as you move through the house in darkness. It’s a deeply percussive album, resulting in gentle rhythms that often give way to moments of real stillness and tenderness that stem from the rich orchestration and composition - one that glides from strings to brass to quietly purring electronics. The album moves through jazz, ambient and electronic to result in something that sounds like it might be a score to Moffat’s dreams. “It’s made with samples, sound effects, keyboards, and the occasional toy,” says Moffat. “All but one of the tracks started with drums – I'd been collecting jazz drum samples and sessions for a while and I would layer a few kits on top of each other to create rhythms, then add music and samples from there.”

When Moffat says “the occasional toy” he means it quite literally. “For ‘Mickey Mouse Strut’ the music began with a recording of a singing Mickey Mouse toy I bought in Japan,” he says. “Its mouth opens when you squeeze its belly and it's quite sinister.” Elsewhere there’s references to Edgar Allen Poe on ‘Long Intervals of Horrible Sanity’, a haunting tribute to the horror writer Shirley Jackson via ‘Shirley Jackson on Drums’ and ‘Theme From’ is a track that Moffat plucked from another project which was going to be an album of twenty 90-second theme tunes for imaginary Netflix shows. However, for someone as revered a lyricist as Moffat - be it with his own solo work, Arab Strap or when working with Bill Wells and RM Hubbert - he’s in entirely instrumental mode here, much like he was with his now defunct L.Pierre alter ego. It results in a fundamental shift in creative approach for Moffat when operating in this format. “For me, making instrumental music is like working with your favourite tool missing,” he suggests. “It's more of a challenge and a bit more risky. It relies more on instinct than songwriting does, or at least it does for me. It requires a bit more trust in yourself when there's no-one to bounce ideas off – in that way, these sorts of records are probably more personal than those with my voice.”

Also, given the album was made in such a personal and intimate way by Moffat as the world was catching z’s, it also succeeds in being a transformative experience for him. “There's an element of escapism in this album – there are no crickets in Glasgow, for instance, but I couldn't resist using recordings of them, I've always loved the way they sound.” Those nighttime sessions and plucking albums from experiments are not an anomaly in Moffat’s life however. “I'm always working on something to varying degrees,” he says. “Right now, I'm working on another three albums that will appear over the coming years. It keeps me sane and happy. I'm very lucky to have a job that's not only enjoyable but is actually a way of winding down too. I live in a sort of backwards world these days where work functions as a stress reliever.”

Barry says: Aidan Moffat is no stranger to a tune, being one of the most prolific and interesting songwriters around today, but in hi Nyx Nott moniker, we get a slow, all-encompassing wave of creeping electronics, soaring synths and powerful, rich emotional heft. As moving as anything he's ever written, but completely different, showing once again why Moffat is so revered.

The Wedding PresentGo Out And Get 'Em Boy!