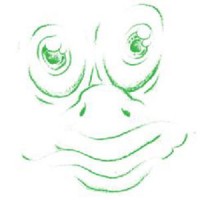 This Oogbogo music was birthed out of Kevin Boog, alone with a 4-track cassette recorder, writing and recording to keep busy between tours with Meatbodies. It was a good outlet for ideas that didn’t fit anywhere else and, without the thought or intention of making a record, it became a bit of a weirdo catharsis. That’s probably why it’s such a fun, weird record, shifting speeds, chopping up and blending new wave, funk and glam styles in an acid-wash with full production wack, making up a set of truly beyond, out-there pop songs.

The lyrics get heavy at times - ego, death, the human race’s condemnation of Earth - with a strong dose of ‘in my room’ existential remove. That’s just good rock and roll lyrics - and then they’re rolled into the tracks like any other texture. Ultimately democratic and this time, democracy wins.

It’s just four songs but ‘Oogbogo’ has an arc from top to bottom, from cover to groove, at peace and expressing its jumbled innards - codices mixed for anyone’s interpretation. Working backwards tactically, the live Oogbogo is a real live band, with Mike Kriebel and Thomas Alvarez from around the way. Inspired to jam by the sudden existence of a record, they’re bound to have an incalculable effect on Oogbogo.

If you’re interested in the future of sound, or just want something to trip out to, try Oogbogo.