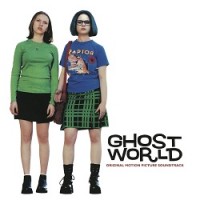 Cinema Paradiso is proud to present the Ghost World soundtrack, released on vinyl for the very first time, as a double gatefold LP.

A film adaptation of the popular Daniel Clowes comic of the same name, Ghost World starred Scarlett Johannson, Thora Birch and Steve Buscemi, becoming a critically acclaimed cult favourite immediately upon its release in 2001. As he did with Crumb, director Terry Zwigoff has created a soundtrack as eclectic and riveting as his movie subjects. The sounds of early jazz and blues play a crucial role in the events of Ghost World - the music heard here is some of the best ever recorded.

Skip James's classic "Devil Got My Woman" from 1931 may be the best-known work on this soundtrack, but it hardly steals the show. Three tracks from weird but riveting jazz-meets-calypso bandleader Lionel Belasco are included; the 70-year-old recordings are so original, they sound timeless. The same praise can be stated of film opener "Jaan Pehechaan Ho" a Bollywood rarity that has elements of surf music, funk, and garage rock. Of course, we also have to hear "Graduation Rap" and Blueshammer's "Pickin' Cotton Blues" two intentionally bad contemporary tracks that make the characters in the movie (and anyone listening to this soundtrack) feel out of place in today's pop culture.

Zwigoff wisely fills out the LP with tracks from his personal 78 record collection, a mix of '20s and '30s string band and blues tunes that are seldom found in compilations (including great cuts by the Dallas String Band, Joe Calicott, and McGee Bros). The haunting "Theme from Ghost World" composed by David Kitay, finishes off the second LP, perfectly capturing all the bittersweet moods found in the film.

SIDE ONE
1. Jaan Pehechaan Ho By Mohammed Rafi
2. Graduation Rap By Vanilla, Jade And Ebony
3. Devil Got My Woman By Skip James
4. I Must Have It By Vince Giordano And The Nighthawks
5. Miranda By Lionel Belasco

SIDE FOUR
1. C-h-i-c-k-e-n Spells Chicken By The McGee Brothers
2. That's No Way To Get Along By Robert Wilkins
3. So Tired By Dallas String Band
4. Bye Bye Baby Blues By Little Hat Jones
5. Theme From Ghost World By David Kitay