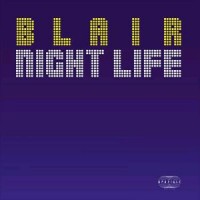 The first officially licensed, re-mastered reissue of the late ‘70s rare groove classic, ‘Nightlife’ from original Blackbyrds guitarist, Barney "Blair" Perry. Original 12” copies of this New York, soul-crooning, boogie masterpiece trade hands for £225+ and with the likes of DJ Harvey and Mr Scruff putting it on rotation, this reissue is serious news for those in the know.

Only a member of the Blackbyrds for their first two albums, penning their hit 'Walking in Rhythm’, by 1978 Perry had released this lone solo gem that would go unappreciated until the ‘90s rare groove scene embraced it. The title cut, ‘Nightlife’ is a boogie funk madness, drenched in sleazy synths and dripping with trademark Perry guitar solos, soul-soaked vocals and straight-up, NYC style.

On the flip - more than 7 minutes of blissful fusion vibes going by the name of ‘Virgo Princess’, heavy on the sweeping strings and kind of eyes closed, lean-back riffs you'd hope for with Barney at the controls!

A1. Nightlife
B1. Virgo Princess