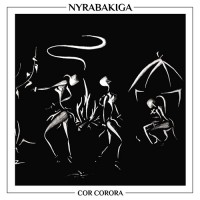 Officially licensed, remastered reissue of a rare and obscure experimental jam from Rotterdam, 'Cor Corora' by Nyra Bakiga, original copies of which have been selling for upwards of £300 on Discogs

Produced by Peter Graute and Martin Van Der Leer, who ran the punk/new wave label and record store Backstreet Backlash Records, 'Cor Corora' is an exploratory journey that sounds light-years ahead of it's 1981 release. Warped, crunched beats, twisted guitars and space echoed delays lay the foundation for Nyra's sublime vocals - who was the wife of an African ambassador in the Netherlands, where her paths crossed with the Backstreet Backlash duo.

Unsurprisingly the likes of Daniele Baldelli and Beppe Loda were giving 'Cor Corora' rotations in the early days of the Italian Afro Cosmic scene and the track is still a prized possession in the record bags of some of the best selectors around, including everyone from Peanut Butter Wolf to Manfredas.

Patrick says: It's time to replace my bootleg! Perhaps the pinnacle of tribal electronics, this brain mulching dose of Afro-cosmic insanity emerged from Rotterdam in 1981, presumably by way of a Stargate. If you want the full effect, you need to go in for the twenty minute trip of the long version on the B-side. If you need me I'll be in the isolation pod.