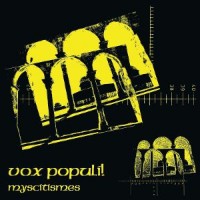 Vox Populi!'s cult and highly sought after debut LP is finally reissued here after 30 years. Recorded after their first single - Ectoplasmies (1983) - between 1984 and 1985, the original band of Mitra and her (then) 14 year old brother Arash and Axel Kyrou, evolved from 2 early cassettes and the 7"s' rudimentary, idiosyncratic and improvisational structures to more cohesive edges.

Living together, but with no formal music education, the nature of the disparate elements led to a sparseness of the recordings. Influenced by his mother, the concrete music pioneer, Mireille Kyrou and her work at GRM (State Institute for Musical Research), Axel challenged his creativity by utilising their Vox Man studio as an instrument.

Building on minimal synth, rhythm box, hand percussion and Persian poetry, they experimented with tape manipulation - layering the music with forward, backward and echo simultaneously - creating a leap in the band's development.

The dark nature Myscitismes was reflected in their increasing interest in industrial and ethnic music, with a great fascination for the religious traditional music of Tibet. Ceremonial, gothic, drone-folk, the progression is apparent; onward perceptions.