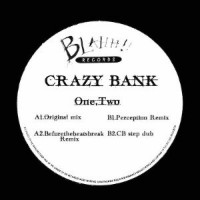 "One, Two" is retro-fitted, elbows-out UK garage. Opting for the 4x4 groove, rather than the shoulder dropped two-step rhythms that would later characterize the genre. Snares are shuffled to oblivion before spiritual organ stabs and deep pads perfectly compliment the big diva vox. Think Danny Rampling's Love Groove Dance Party in full swing!

Perception glides in on rich sub bass and a skitty 2step pattern. Certain percussion elements are shuffled so far you'll nearly be falling over! Cleverly constructed and just as soulful as its source material, this is a killer remix from Perception.

Beforethebeatsbreak are up next, chopping up the original track for a tight, snappy refix that bangs hard and brings the original vibe kicking and screaming into the main rooms. This is gonna punish the Voids!

Finally, the CB Step Dub switches between bassline and two-step vibes every so often, keeping the energy levels high as it dances between these two arresting grooves with ease.