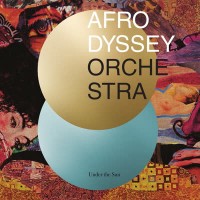 Second album by Greece's premiere Afro-jazz band. An Odyssey of sound through West African percussion, jazz, Greek melodies and a tinge of funk.

Greece is maybe not the first country that comes to mind when you think of Afrojazz. Afrodyssey Orchestra unexpectedly hit the scene some time ago after we released In the Land of Aou Tila, their debut album — while that first album was going to the hands of the few lucky ones who managed to discover the band back then, Afrodyssey Orchestra were already booking more studio time in order to start working on further recordings. Three years later, we're proud to present you Under the Sun, with seven new compositions that reflect the logical evolution the band has experienced during this time, including some fine-tuning in their line-up. A melange of African polyrhythms, jazz, a scent of the Balkans and a fling with Afrobeat that holds hands with their beginnings — all this devised through the prism of the vast Greek musical universe.