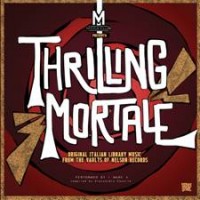 This album digs deeper into the most experimental recordings in the archives of Nelson Records. The label was founded in 1970 by the musicians Maurizio Majorana, Antonello Vannucchi and Roberto Podio (who along with Carlo Pes would be known as I MARC 4), after establishing the Telecinesound studio, right where the New Italian Library Sound was created. They recorded with Armando Trovajoli, Piero Piccioni, Ennio Morricone, Piero Umiliani, Henry Mancini and many others, and created a special sound, mixing jazz, pop, rock and psychedelic music, to produce records aiming to be used by the programmers of the Italian RAI television.

The music of "Thrilling Mortale" is mostly special effects, drum breaks, fast bongo rhythms and groovy Hammond background sounds inspired by cinema noise experts who did not use any musical instruments and had only a few objects to recreate the noises of the films; from horse rides to closing gates, everything was done in the traditional way. I MARC 4, instead, would recreate those sounds with bass, guitar, drums, piano and Hammond organ.

Many musicians, record producers and film directors still like, look for, rediscover and re-use for their work, and the music on these albums recorded by I MARC 4 between 1970-1976 have reached cult status among library music collectors.